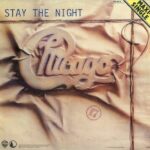 “Stay The Night” is a song written by Peter Cetera and David Foster for the group Chicago and recorded for their album Chicago 17 (1984), with Cetera singing the lead vocals. The song features noted session drummer Jeffrey Porcaro taking the place of Chicago drummer Danny Seraphine.

Cash Box said that the song is very different from Chicago’s “vocal harmonies and horns heyday,” having “a hard rocking drum beat, some techno-synth backing and an upper-register lead vocal.” Upbeat and rock-oriented, it was the first single released from that album, and reached number 16 on the U.S. Billboard Hot 100 chart.