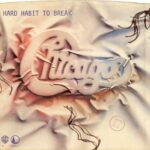 “Hard Habit To Break” is a song written by Steve Kipner and John Lewis Parker, produced and arranged by David Foster and recorded by the group Chicago for their 1984 album Chicago 17, with Bill Champlin and Peter Cetera sharing lead vocals. Released as the second single from the album, it reached No. 3 on the Billboard Hot 100 and was prevented from any more chart movement by “Caribbean Queen” by Billy Ocean and “I Just Called to Say I Love You” by Stevie Wonder. “Hard Habit to Break” also peaked at No. 3 on the Adult Contemporary chart.Overseas it peaked at No. 8 on the UK Singles Chart.

“Hard Habit to Break” was nominated for four Grammy Awards: Foster and Jeremy Lubbock won the award for Best Instrumental Arrangement Accompanying Vocal(s); Chicago were nominated for the song in the categories Record of the Year and Best Pop Performance by a Duo or Group with Vocal; and Cetera and Foster were nominated for Best Vocal Arrangement for Two or More Voices. Songwriters Kipner and Parker won an ASCAP award in 1986 for most-performed song.