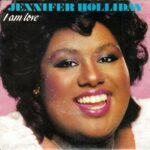 “I Am Love” is a song by singer Jennifer Holliday, released as a single in 1983 by Geffen Records from her album Feel My Soul. The song reached No. 2 on the Billboard Hot R&B Singles chart.

I Am Love” was produced by Maurice White and written by White, David Foster and Allee Willis. The B-side of the single is a song called “Heartstrings”.

Feel My Soul is the 1983 debut album of Jennifer Holliday, released on Geffen Records. The album was produced by Maurice White, founder and leader of the funk band Earth, Wind and Fire. Feel My Soul followed Holliday’s success in her role as Effie White in the original Broadway production of the musical Dreamgirls. Tracks […]