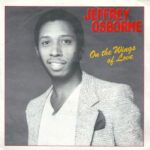 “On the Wings Of Love” is a song by Jeffrey Osborne from his self-titled debut album released in 1982. Written alongside Peter Schless, the song was the second single from the album.

Jeffrey Osborne is the self-titled debut album from Jeffrey Osborne, released in 1982 on A&M after leaving L.T.D. for a solo career. After Osborne departed from L.T.D. in 1980, legal issues prevented him from signing his solo deal with A&M for a whole year. After signing to A&M as a solo artist, Osborne began work […]