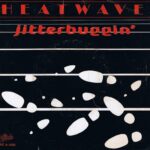 “Jitterbuggin'” is the second single by Heatwave taken from their album Candles and got to #34 in the UK Charts.