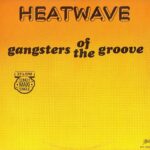 “Gangsters Of The Groove” is the first single from the Heatwave album Candles. It was released in 1981 at reached #19 in the UK Charts.