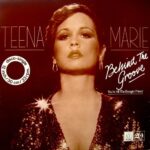 “Behind The Groove” is the second single by Teena Marie from her album Lady T, which peaked at #21 on the US Black Singles chart and became Teena Marie’s only top 20 hit in the United Kingdom, reaching #6.