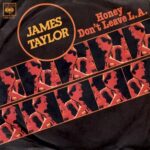 “Honey Don’t Leave L.A.” is a song written by Danny Kortchmar. It was first recorded by Attitudes, a band consisting of Kortchmar, Paul Stallworth, Jim Keltner and David Foster, who met while backing George Harrison on his album Extra Texture (Read All About It). It was released on Attitudes’ self-titled debut album in 1976. It was also released as a promotional single on Harrison’s Dark Horse Records label.