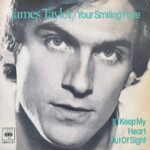 “Your Smiling Face” is a hit single by singer James Taylor. First available on the album JT, and released as the album’s sophomore single in September 1977, “Your Smiling Face” peaked at number 11 in Cash Box magazine and at 20 on the Billboard Hot 100 near year’s end. It reached number 11 on the RPM Top Singles chart in Canada. On Billboard’s Adult Contemporary chart, it reached number 6.