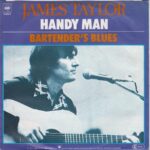 “Handy Man” is a song written by singer Jimmy Jones and songwriter Otis Blackwell. Recordings by Del Shannon and also The Sparks Of Rhythm list Charles Merenstein as a co-writer, as does BMI. The Sparks Of Rhythm version on the Apollo 541 single version released in 1959 credits Andrew Barksdale and Merenstein as writers omitting Jimmy Jones. The song is noted for Jones singing “Come-a, come-a come-a come-a, come come-a, yeah” lyrics, which are heard at the beginning as well as in the coda of the song, before the song’s fade.