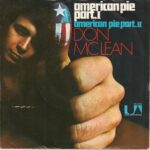 “American Pie” is a song by American singer and songwriter Don McLean. Recorded and released in 1971 on the album of the same name, the single was the number-one US hit for four weeks in 1972 starting January 15  after just eight weeks on the US Billboard charts (where it entered at number 69). The song also topped the charts in Australia, Canada, and New Zealand. In the UK, the single reached number 2, where it stayed for three weeks, on its original 1971 release and a reissue in 1991 reached No. 12. The song was listed as the No. 5 song on the RIAA project Songs of the Century. A truncated version of the song was covered by Madonna in 2000 and reached No. 1 in at least 15 countries, including the United Kingdom, Canada, and Australia. At 8 minutes and 42 seconds, McLean’s combined version is the sixth longest song to enter the Billboard Hot 100 (at the time of release it was the longest). The song also held the record for almost 50 years for being the longest song to reach number one before Taylor Swift’s “All Too Well (10 Minute Version)” broke the record in 2021. Due to its exceptional length, it was initially released as a two-sided 7-inch single. “American Pie” has been described as “one of the most successful and debated songs of the 20th century”.

The repeated phrase “the day the music died” refers to a plane crash in 1959 that killed early rock and roll stars Buddy Holly, The Big Bopper, and Ritchie Valens, ending the era of early rock and roll; this became the popular nickname for that crash. The theme of the song goes beyond mourning McLean’s childhood music heroes, reflecting the deep cultural changes and profound disillusion and loss of innocence of his generation – the early rock and roll generation – that took place between the 1959 plane crash and either late 1969 or late 1970. The meaning of the other lyrics, which cryptically allude to many of the jarring events and social changes experienced during that period, have been debated for decades. McLean repeatedly declined to explain the symbolism behind the many characters and events mentioned; he eventually released his songwriting notes to accompany the original manuscript when it was sold in 2015, explaining many of these, and further elaborated on the lyrical meaning in a 2022 interview/documentary celebrating the song’s 50th anniversary, in which he stated the song was driven by impressionism and debunked some of the more widely speculated symbols.

American Pie is the second studio album by American singer-songwriter Don McLean, released by United Artists Records on 24 October 1971. The folk rock album reached number one on the Billboard 200, containing the chart-topping singles “American Pie” and “Vincent.” Recorded in May and June 1971 at The Record Plant in New York City, the […]