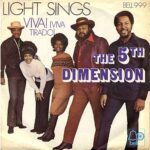 The song was produced by Bones Howe and arranged by Bob Alcivar.

Love’s Lines, Angles and Rhymes is the sixth album by American pop group The 5th Dimension, released in 1971. The title song had been recorded originally by Diana Ross the previous year. It reached #17 on Billboard’s Top 200 Album Chart and became the band’s third consecutive album to be certified Gold. Following the success […]