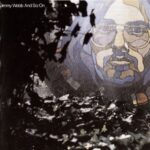 And So: On is the third album by American singer-songwriter Jimmy Webb, released in May 1971 by Reprise Records.

Following the commercial failure of his second album, Words and Music, Webb was given a second chance by Reprise, who wanted a follow-up as soon as possible. In May 1971, only six months after the release of its predecessor, And So: On was released.

With his record company pressing for a quick follow-up release to Words and Music, Webb did not have time to write an entire album of new material. Only four of the songs carry a 1971 copyright date: “Met Her on a Plane”, “Laspitch”, “One Lady”, and “If Ships Were Made to Sail”. The rest of the songs date back as far as 1967’s “Marionette”. Ed Ames recorded “All My Love’s Laughter” in 1968, and Thelma Houston recorded “Pocketful of Keys” in 1969. “Highpockets” and “Laspitch” were originally intended for a proposed Broadway musical.

Several songs from the album would later be covered successfully by other artists, including “See You Then” by Roberta Flack in 1971, “Met Her on a Plane” by Ian Matthews in 1972, “If Ships Were Made to Sail” by Scott Walker in 1973, and “Marionette” by Art Garfunkel in 1978.