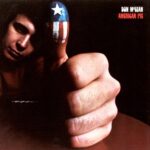 American Pie is the second studio album by American singer-songwriter Don McLean, released by United Artists Records on 24 October 1971. The folk rock album reached number one on the Billboard 200, containing the chart-topping singles “American Pie” and “Vincent.” Recorded in May and June 1971 at The Record Plant in New York City, the LP is dedicated to Buddy Holly, and was reissued in 1980 minus the track “Sister Fatima”. The album was released to much acclaim, later being included in the book 1001 Albums You Must Hear Before You Die.

At the Australian 1972 King of Pop Awards the album won Most Popular Overseas L.P.

American Pie is McLean’s second album; his first, Tapestry, having been released to only moderate commercial success and acclaim in 1970. McLean was a protégé of Pete Seeger, having played with him in the 1960s. The album American Pie was intended as a unified work, as McLean has said that he was influenced by the Beatles’ Sgt Pepper album and envisioned American Pie to be a similar album. Believing that an artist’s work should stand by itself, McLean generally did not offer explanations for his work’s themes or meaning, though he did describe the title song as involving “a sense of loss”. McLean dedicated the album to Buddy Holly, one of his childhood icons, and it was released in 1971. It has a melancholy feel and rather sparse arrangements. At the time of the writing McLean’s first marriage was failing and the optimism and hopefulness of the 1960s was giving way to the nihilism and hedonism of the 1970s