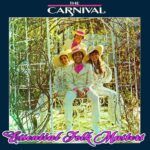 Carnival (1969, Liberty) is the only album released by The Carnival.

The Carnival was an American pop group formed by percussionist José Soares and vocalist Janis Hansen, both formerly of Sergio Mendes’ Brasil ’66. Initially a joint venture between Walter Wanderley and the original members of Brasil ’66, the group eventually settled into a quartet augmented by Terry Fischer of the Murmaids and bassist Tommy Neal.

The quartet’s Brasil ’66-meets-5th Dimension sound was largely the brainchild of producer-engineer Bones Howe, who gathered L.A.’s Wrecking Crew studio musicians like Hal Blaine and Larry Knechtel for the project.

A self-titled album was released in 1969 Two singles, “Son of a Preacher Man” b/w “Walk On By” and “Laia Ladaia” b/w “Canto de Carnival”, were issued to promote what was supposed to be their debut album. Despite Howe’s name attached to the project, public reaction was minimal; and plans for a follow-up record were scrapped. A single culled from the aborted sessions, “Where There’s a Heartache (There Must Be a Heart)” b/w “The Truth About It”, was put out in December 1970; but the Carnival had already dissolved by then.