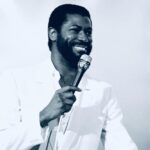 Theodore DeReese Pendergrass (March 26, 1950 – January 13, 2010) was an American singer. Born at Thomas Jefferson University Hospital in Philadelphia, Pennsylvania, Pendergrass spent most of his life in the Philadelphia area, and initially rose to musical fame as the lead singer of Harold Melvin & the Blue Notes. After leaving the group in 1976, Pendergrass launched a successful solo career under the Philadelphia International label, releasing five consecutive platinum albums (a record at the time for an African-American R&B artist). Pendergrass’s career was suspended after a March 1982 car crash left him paralyzed from the shoulders down. Pendergrass continued his successful solo career until announcing his retirement in 2007. (more)

1985 Teddy Pendergrass – Workin’ It Back