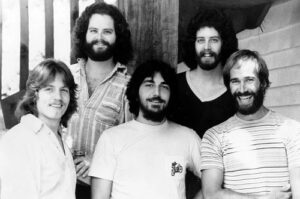 Orleans is an American pop rock band best known for its hits “Dance with Me” (No. 6 in 1975); “Still the One” (No. 5 in 1976), from the album Waking and Dreaming; and “Love Takes Time” (No. 11 in 1979). The group’s name evolved from the music it was playing at the time of their formation, which was inspired by Louisiana artists such as Allen Toussaint and the Neville Brothers. Orleans was formed in Woodstock, New York in January 1972 by vocalist/guitarist/songwriter John Hall, vocalist/guitarist/keyboardist/bassist/songwriter Larry Hoppen and drummer/keyboardist/songwriter Wells Kelly. In October of that year, the group expanded to include Larry’s younger brother, Lance, on bass. Drummer Jerry Marotta joined in 1976, completing the quintet. (Hall was later elected to the United States House of Representatives.)(more)