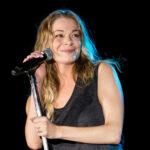 Margaret LeAnn Rimes Cibrian (born August 28, 1982)  is an American singer, songwriter and actress. She originally rose to success as a country music artist at age 13 with 1996’s “Blue”. She has since crossed over into pop, contemporary Christian, and other musical genres. Rimes has placed over 40 singles on international charts since 1996. In addition, she has sold over 37 million records worldwide, with 20.8 million album sales in the United States according to Nielsen SoundScan. Billboard ranked her number 17 in terms of sales success in the 1990–2000 decade.

Rimes was raised in Texas and demonstrated a unique singing ability from a young age. Through her parents’ efforts, Rimes began performing in various programs, including musical theater and local music contests. Developing a local following, Rimes recorded two studio albums as a preteen. These records helped bring her to the attention of Nashville label Curb Records. She signed a contract with Curb at age 13 and released 1996’s “Blue”. It became a top ten hit on the Billboard country songs chart. Her 1996 album of the same name sold over six million copies and established her as a major country artist. In 1997, Rimes crossed over into pop music with “How Do I Live”. The song became one of the best-selling singles of the 1990s. An extended mix of the track was included on her next album You Light Up My Life: Inspirational Songs, which sold over four million copies. Over the next several years, Rimes’s singles demonstrated further crossover success. These include “I Need You” and “Can’t Fight the Moonlight”.

Breaking away from her father’s management in the 2000s, Rimes experimented with several styles. In 2002, she released the pop-inspired Twisted Angel and in 2004 released the Christmas record What a Wonderful World. She returned to her country origins with 2005’s This Woman, which produced three country hits. A similar album project followed in 2007 titled Family. After appearing in the 2009 television film Northern Lights, Rimes began an affair with fellow actor Eddie Cibrian. The relationship received notable media attention over the next several years. Her 2013 album, Spitfire chronicled the affair and her personal difficulties from the experience.

Ending her long-time professional relationship with Curb Records, Rimes released a series of Christmas recordings over the next several years. This included 2014’s One Christmas: Chapter 1 and 2015’s Today Is Christmas. In 2016, she returned with the pop-flavored studio effort Remnants, which featured two Billboard dance club hits. Her most recent efforts include a 2020 album titled Chant: The Human & the Holy, which centers on personal mantras and chants inspired by Rimes’s mental health journeys. Rimes further developed her acting career during this period. She has since appeared in several feature and television films including Good Intentions (2010), Reel Love (2011), and It’s Christmas, Eve (2018). She also guest appeared in the Netflix series Country Comfort (2021) as herself. (more)