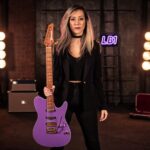 Larissa Basilio ( São Paulo , June 23, 1988 ) is a Brazilian guitarist, winner of the instrumental category of the Samsung E-Festival in 2014 and for being the first and only woman to participate in the JTC album, Guitar Hero Ballads 2 with her song “Redeemed” and at the G4 Experience exhibition, in 2019. She has the ability to say it all in his melodies. With a melodic style, yes, but also powerful, shhe never misses an opportunity to show her peculiar way of playing, hiding the nib between his fingers when she does not need it and returning to it through a game of fingers that reminds us of those expert dealers in Las Vegas. .

In an interview she confesses that she has never felt the need to put lyrics to his songs, she tells us “I try to make music have its own discourse, that it says everything, and even goes beyond words”, giving the last song as a reference from their self-titled EP titled “Do you need words”.

In her albums she has printed a personal stamp, a style that is beginning to be recognized by the heavyweights of the guitar. In fact, that personal stamp of hers made Joe Satriani send her an e-mail, inviting her to participate in the G4 Experience V5 Special called “Rocks The Desert”.