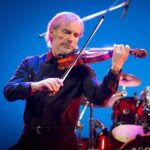 Ponty was born into a family of classical musicians in Avranches, France. His father taught violin, his mother taught piano. At sixteen, he was admitted to the Conservatoire National Supérieur de Musique de Paris, graduating two years later with the institution’s highest honor, Premier Prix (first prize). He was hired by the Concerts Lamoureux in which he played for three years.

While still a member of the orchestra in Paris, Ponty picked up a side job playing clarinet (which his father had taught him) for a college jazz band, that regularly performed at local parties. It proved life-changing. A growing interest in Miles Davis and John Coltrane compelled him to take up tenor saxophone. One night after an orchestra concert, and still wearing his tuxedo, Ponty found himself at a local club with only his violin. Within four years, he was widely accepted as the leading figure in “jazz fiddle”.

At that time, Ponty was leading a dual musical life: rehearsing and performing with the orchestra while also playing jazz at clubs throughout Paris. The demands of this schedule eventually brought him to a crossroads. Critic Joachim Berendt wrote that “Since Ponty, the jazz violin has been a different instrument”. (more)