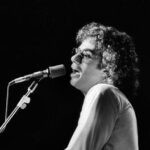 Bill Quateman (born November 4, 1947, Chicago, Illinois) is an American singer-songwriter. Quateman released four albums in the 1970s and charted with the single “Only Love”, which reached No. 86 on the Billboard Hot 100 in 1973.

He started his music career as a singer/songwriter during the 70’s folk music era in Chicago. His first record deal in 1972 was with Clive Davis at Columbia. The album was successful, with two fairly big hits. While working on his second album, the Clive Davis scandal hit Columbia. The new management wanted to go into a different direction than Quateman. He got dropped from Columbia.

He was picked up by RCA years later. The success of the first album couldn’t be recreated. The next three albums did well enough, but not nearly as well as his first. The three albums were heavily produced. His first album was sparse and fit the definition of that singer/songwriter era, the next three were more corporate of the time. Quateman temporarily retired from the music industry to raise his children.

In the 2000s, he reemerged to perform publicly for a brief period. He released the 1973 album (in theory his second album) he worked on at Columbia, and two more albums. He published a book based on raising his daughter as a single parent. He became a health coach and eventually founded a Natural Medicine Company. He is currently the International Director of Advanced Bio Cell.