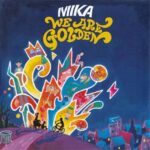 “We Are Golden” is the first single from English singer Mika‘s second studio album, The Boy Who Knew Too Much. The song was produced and mixed by Greg Wells and features the gospel choir of Andraé Crouch.

The single made its radio airplay debut in the United Kingdom on 20 July 2009, on BBC Radio 2. It was made available for download on 14 August 2009 in Australia and later on 6 September 2009 in the United Kingdom. It was released physically on 7 September 2009 along with the limited edition 7″ and 12″ gramophone records. In the United States, “We Are Golden” became available exclusively from Apple’s iTunes Store for one week starting 18 August 2009. The song was featured in many TeenNick promos in Fall 2009. It is also used in an ABC series, Make It or Break It, while in Malaysia, it was used for the kids@fgw promo which is shown in January 2010 on ntv7 and in the first episode of the TV show Hellcats.

The Boy Who Knew Too Much is the second studio album by singer Mika. It was released on 21 September 2009, under Casablanca/Universal Republic in the United States and Island in the United Kingdom. Mika worked with producer Greg Wells, who also produced his debut album Life in Cartoon Motion. The album was written in […]