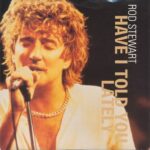 “Have I Told You Lately” is a song written and recorded by Northern Irish singer and songwriter Van Morrison for his nineteenth studio album Avalon Sunset (1989). It is a romantic ballad that is often played at weddings, although it was originally written as a prayer.

Rod Stewart covered the song for his album Vagabond Heart (1991). A live version from his album Unplugged…and Seated (1993) was released as a single, becoming a number-five hit in the US and the UK. This version also reached number four on the US Billboard Mainstream Top 40 chart,  and spent five weeks at number one on the US Billboard Adult Contemporary chart. It was certified gold by the RIAA in the US and sold 700,000 copies there. Another live version by Stewart from his 2013 performance at The Troubadour, West Hollywood was included on the deluxe edition of his album Time.

Vagabond Heart is the 16th studio album by the singer-songwriter Rod Stewart, released in 1991. The album reached #10 in the US, and reached #2 in the UK. The album featured five singles, among them a cover for Robbie Robertson’s song “Broken Arrow” (#20 in the U.S.) and Van Morrison’s song “Have I Told You […]