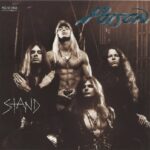 “Stand” is a song recorded by American band Poison, written by Richie Kotzen prior to joining the band. It was the first single from their 1993 album Native Tongue. The song reached number 15 on the Mainstream rock chart, #35 on the top 40 mainstream chart and #50 on the Billboard Hot 100. The song also charted at number 25 on the UK Singles chart, it was also the first Poison single and music video to feature lead guitarist Richie Kotzen.

The song fuses elements of country rock and gospel music; the album version includes the Los Angeles First A.M.E. Church choir on backing vocals. The single’s B-side, Whip Comes Down, hasn’t featured on any Poison album to date. This is the only song released by the band not featuring the classic lineup that is still performed by the band in concert.

Native Tongue is the fourth studio album by American glam metal band Poison, released in 1993 through Capitol Records. It peaked at #16 on the Billboard 200,[6] #20 on the UK Albums Chart and was certified Gold by the RIAA on April 21, 1993. It has also been certified by CAN platinum. This is the […]