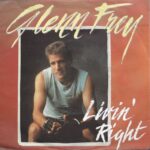 In the liner notes to the original album, Glenn Frey wrote of the song, “My anthem to fitness. Jack and I both started working out, eating right and generally tightening up our acts. Having tried nearly every other way to feel good, we’ve wound up back in gym class. Who’d of thunk it!”

Unlike the other singles from the album, it was not as successful as it reached a poor peak position of No. 90 on the Billboard Hot 100, but it charted at No. 22 on the Adult Contemporary chart.