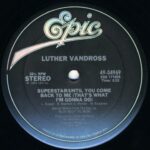 “Superstar” is a 1969 song written by Bonnie Bramlett and Leon Russell with a songwriting credit also given to Delaney Bramlett that has been a hit for many artists in different genres and interpretations in the years since; the best-known versions are by the Carpenters in 1971, and by Luther Vandross in 1983.

In the early 1980s, American R&B/soul singer-songwriter Luther Vandross had “Superstar” in his stage act, sometimes in a rendition that stretched to 12 minutes, with vocal interpolations and an interpretive dancer.

Vandross then recorded “Superstar” in 1983 in a slower, more soulful fashion, as part of a medley with Stevie Wonder’s “Until You Come Back to Me (That’s What I’m Gonna Do)” on his album Busy Body. Released as a single the following year, it became an R&B hit, reaching number 5 on the Billboard Top R&B Singles chart. It did not have much pop crossover effect, however, only reaching number 87 on the Billboard Hot 100.

Busy Body is the third studio album by American R&B/soul singer-songwriter Luther Vandross, released on November 25, 1983. It was certified platinum by the RIAA in January 1985. The album was released around the time Michael Jackson’s Thriller album was in the charts. It hit the number position in the week of  April 13, 1984 […]