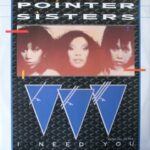 “I Need You” was the first single from the Pointer Sisters album Break Out, released in October 1983.