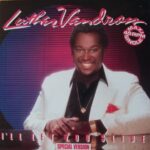 “I’ll Let You Slide” is a song by American recording artist Luther Vandross. The song is from his third studio album Busy Body. Released in 1983, the single reached No. 9 on the Billboard Hot R&B Singles chart.

Busy Body is the third studio album by American R&B/soul singer-songwriter Luther Vandross, released on November 25, 1983. It was certified platinum by the RIAA in January 1985. The album was released around the time Michael Jackson’s Thriller album was in the charts. It hit the number position in the week of  April 13, 1984 […]