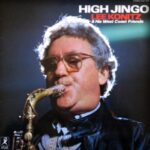 Leon Konitz (October 13, 1927 – April 15, 2020) was an American composer and alto saxophonist. He performed successfully in a wide range of jazz styles, including bebop, cool jazz, and avant-garde jazz. Konitz’s association with the cool jazz movement of the 1940s and 1950s includes participation in Miles Davis’s Birth of the Cool sessions and his work with pianist Lennie Tristano. He was one of relatively few alto saxophonists of this era to retain a distinctive style, when Charlie Parker exerted a massive influence. Like other students of Tristano, Konitz improvised long, melodic lines with the rhythmic interest coming from odd accents, or odd note groupings suggestive of the imposition of one time signature over another. Other saxophonists were strongly influenced by Konitz, such as Paul Desmond and Art Pepper.

5 The Shadow Of Your Smile