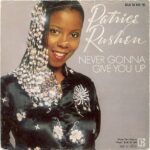 The song was later sampled  in “Two Takes It (feat. Carmen Castro)” by Mr. Oizo from the album “Lambs Anger”

Posh is a 1980 album released by R&B singer Patrice Rushen, her third album for Elektra Records and sixth album overall. The album was recently re-released on Wounded Bird Records, as were several other Rushen albums from the time. Following the Pizzazz album, Posh was the continuation of a string of R&B/pop albums that would establish Rushen as an R&B singer. “Look Up!,” […]

END_OF_DOCUMENT_TOKEN_TO_BE_REPLACED

2021 Galaxy – On The Shore Of Life Yutaka Yokokura