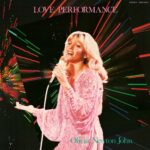 Love Performance is the first live album by Australian singer-songwriter Olivia Newton-John. It was recorded in 1976, during the Love Performance Tour, in Japan. The tour promoted her 1976 album, Don’t Stop Believin’. The album was released only in 1981 by EMI Music Japan (formerly Toshiba EMI).

The album was released only on vinyl, in Japan. No re-release has been made since the original issue, making this a coveted item among Olivia’s fans. However, six tracks were released as bonus tracks on the re-release of some Newton-John studio albums, who were included in the box 40th Anniversary Collection, released by Universal Music Japan.