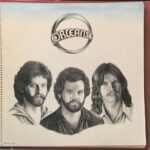 Orleans is the the sixth and the second self-titled album by Orleans, released in 1980.

Infinity was absorbed into MCA Records, who failed to promote the Orleans album. This last, recorded in Woodstock, featured only the Hoppens and Wells Kelly as Orleans proper, since the others had left earlier in the year. Nonetheless, the album featured guest appearances from all past members, including John Hall, who was in the process of forming the John Hall Band with Leinbach as a member. Orleans was produced by Englishman Robin Lumley, mixed at Trident Studios in London and featured Lumley’s friend, Phil Collins, contributing backing vocals to one track.

Just after recording that 1980 release, the group added Dennis “Fly” Amero (guitars, vocals) to replace Leinbach. The live lineup still featured Robert (R.A.) Martin and the band completed a tour of amusement parks that summer, only to learn that their accountant had misappropriated funds, leaving them in debt. Martin left, “Fly” stayed, Larry and Lance recruited their younger brother, Lane Hoppen, to play keyboards and drummer Charlie Shew (at that time going under the pseudonym Eric Charles) to play alongside Wells Kelly. Charlie then replaced Wells when he left by early 1981 to relocate to NYC.

2 When Are You Coming Home?

8 Oughta Daughta (Think I Will)