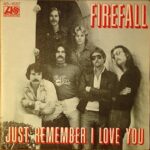 “Just Remember I Love You” is a song by American rock band Firefall from their album, Luna Sea (1977), with backing vocals by Timothy B. Schmit. It was written by Rick Roberts and released as a single on July 21, 1977.

Luna Sea is the second album by Firefall, released in 1977. It featured the single “Just Remember I Love You” which reached #11 on the Billboard Hot 100 and #1 on the Adult Contemporary chart. The title is a pun on “lunacy”.