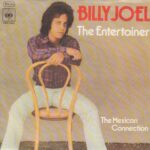 “The Entertainer” is a single by singer Billy Joel released as the only single from his 1974 album Streetlife Serenade. The song peaked at #34 on the US charts. The song is a cynical and somewhat satirical look at the fleeting fame of a musician and fickle public tastes (“Today I am your champion / I may have won your hearts / But I know the game / You’ll forget my name / (And I won’t be here / in another year) / if I don’t stay on the charts”); this theme would be examined in the later song “It’s Still Rock and Roll to Me”.

Streetlife Serenade is the third studio album by American recording artist Billy Joel, released on October 11, 1974, by Columbia Records. The follow-up to Piano Man (1973), the album was recorded mostly with session musicians—the last such release until 1993’s River of Dreams. Joel sang and played piano and other keyboards, including his first work […]