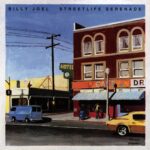 Streetlife Serenade is the third studio album by American recording artist Billy Joel, released on October 11, 1974, by Columbia Records.
The follow-up to Piano Man (1973), the album was recorded mostly with session musicians—the last such release until 1993’s River of Dreams. Joel sang and played piano and other keyboards, including his first work with the Moog synthesizer. Backing musicians included guitarists Don Evans and Al Hertzberg and banjo/pedal steel guitarist Tom Whitehorse.
The album peaked at No. 35 on the charts, eventually selling more than one million copies. That was less than its predecessor, and marked the beginning of Joel’s frosty relationship with critics and the music industry in general. Joel’s live shows in the 1970s frequently featured the instrumental “Root Beer Rag” and the short song “Souvenir”, which was often used as the final encore.
Live versions of “Streetlife Serenader” and “Los Angelenos” appeared on Joel’s first live album, Songs in the Attic (1981). A live version of “The Entertainer” appeared on Joel’s 2006 album 12 Gardens Live.
Joel said that he had been touring in clubs and theatres and opening for big acts such as The Beach Boys, thus leaving him little time to write new songs, but he was under pressure to put out a new album after Piano Man. He also says that he did not have many new songs, hence the inclusion of the instrumentals “Root Beer Rag” and “The Mexican Connection”. The back cover features a barefooted Joel sitting in a chair looking cross; Joel says that he had had his wisdom teeth extracted two days before the shoot. The front cover is a painting by Brian Hagiwara of a hotel and café located at 651 South Centre Street in Los Angeles, California.