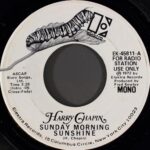 “Sunday Morning Sunshine” is a song written and performed by Harry Chapin. The song was included on his 1972 album, Sniper and Other Love Songs. The song was released as a single the same year as his top 20 hit, “Taxi” and debut album, Heads & Tales. Cash Box described it as a “realistic look at city life.” The song charted on the Billboard Hot 100, however it received more commercial success when it charted as a top 30 on the Billboard Adult Contemporary. The song has also been included on numerous posthumous compilation albums. King Biscuit Flower Hour recorded a live performance of the song for the show.

Sniper And Other Love Songs is the second studio album by the American singer/songwriter Harry Chapin, released in 1972. The album’s title song is a vaguely fictionalised account of Charles Whitman’s shootings from the clocktower of the Main Building of the University of Texas at Austin in August 1966. In 2004 it was released as […]