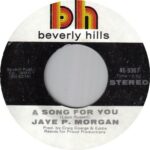 “A Song For You” is a song written and originally recorded by rock singer and pianist Leon Russell for his first solo album Leon Russell, which was released in 1970 on Shelter Records. A slow, pained plea for forgiveness and understanding from an estranged lover, the tune is one of Russell’s best-known compositions. Russell not only sings and plays piano on the recording, but also plays the tenor horn that is accompanying. It has been performed and recorded by over 200 artists, spanning many musical genres. Elton John has called the song an American classic.

Jaye P Morgan released a cover version in 1971, it was a none album track and reached #105 on the Billboard Charts.