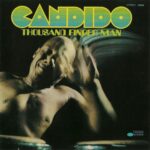 Cándido Camero Guerra (22 April 1921 – 7 November 2020), known simply as Cándido, was a Cuban conga and bongo player. He is considered a pioneer of Afro-Cuban jazz and an innovator in conga drumming. He was responsible for the development of tuneable conga sets, as well as the combination of congas and bongos, and other instruments such as the foot-operated cowbell.