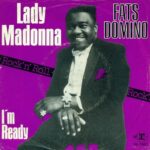 “Lady Madonna” is a song by the English rock band the Beatles, written primarily by Paul McCartney and credited to Lennon–McCartney.

Fats Domino covered the song on his 1968 album Fats Is Back. McCartney says he may have told record producer Richard Perry that the song was “based on Fats”, leading to Domino’s version. Also released as a single, Domino’s recording peaked at number 100 on the Billboard 100 in September 1968, giving the singer his 77th and final US chart hit.

Fats Is Back is an album by Fats Domino. It was released in 1968. John Lennon and Paul McCartney recorded Domino songs. According to some reports, McCartney wrote the Beatles song “Lady Madonna” in emulation of Domino’s style, combining it with a nod to Humphrey Lyttelton’s 1956 hit “Bad Penny Blues”. Domino also recorded the […]