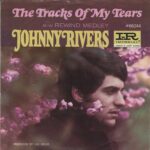 “The Tracks of My Tears” is a song written by Smokey Robinson, Pete Moore, and Marv Tarplin. It is a multiple award-winning 1965 hit R&B song originally recorded by their group, the Miracles, on Motown’s Tamla label. The Miracles’ million-selling original version has been inducted into The Grammy Hall of Fame, has been ranked by the Recording Industry Association of America and The National Endowment for the Arts at No. 127 in its list of the “Songs of the Century”

In 1967, “The Tracks of My Tears” was covered by Johnny Rivers. His version of the song reached No. 10 on the Billboard Hot 100 chart, and No. 8 in Canada. It was arranged by Marty Paich.

Rewind is the fourth studio album by the American musician Johnny Rivers, released in 1967 by Imperial Records. The album includes cover versions of “Baby, I Need Your Lovin’” and “The Tracks of My Tears”. Produced by Lou Adler with arrangements by Jimmy Webb, who wrote seven of the songs. Noted Los Angeles session musicians […]