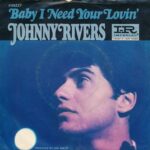 “Baby I Need Your Loving” is a 1964 hit single recorded by the Four Tops for the Motown label. Written and produced by Motown’s main production team Holland–Dozier–Holland, the song was the group’s first Motown single and their first pop Top 20 hit, making it to number 11 on the US Billboard Hot 100 and number four in Canada in the fall of 1964. It was also their first million-selling hit single.

“Baby I Need Your Lovin'” was covered in 1967 by Johnny Rivers, reaching No. 3 on Billboard Hot 100, topping the original version in chart performance. The song reached #1 in Canada.

As with Rivers’ precedent single: the No. 1 hit “Poor Side of Town”, his “Baby I Need Your Loving” was performed in an orchestral pop style, being arranged by Marty Paich and featuring the LA Phil musicians who had performed on the Mamas and the Papas inaugural Top Ten hits. The second single from the track’s parent album: Rewind, was also an orchestral pop version of a Motown classic, being Rivers’ version of “The Tracks of My Tears”.

Rewind is the fourth studio album by the American musician Johnny Rivers, released in 1967 by Imperial Records. The album includes cover versions of “Baby, I Need Your Lovin’” and “The Tracks of My Tears”. Produced by Lou Adler with arrangements by Jimmy Webb, who wrote seven of the songs. Noted Los Angeles session musicians […]