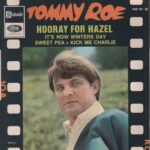 “Hooray For Hazel” is a song written and performed by Tommy Roe with backing vocals by Lee Mallory. It reached number 1 in New Zealand, number 2 in Canada, number 6 on the Billboard Hot 100, and number 28 in Australia, in 1966. It was featured on his 1966 album Sweet Pea.

Sweet Pea is the fourth solo album by Tommy Roe, released in 1966.