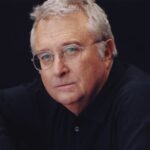 Randall Stuart Newman (born November 28, 1943) is an American singer-songwriter, arranger, composer, and pianist known for his Southern-accented singing style, early Americana-influenced soul songs (often with mordant or satirical lyrics), and various film scores. His best-known songs as a recording artist are “Short People” (1977), “I Love L.A.” (1983), and “You’ve Got a Friend in Me” (1995), while other artists have enjoyed more success with cover versions of his “Mama Told Me Not to Come” (1966), “I Think It’s Going to Rain Today” (1968) and “You Can Leave Your Hat On” (1972).

Born in Los Angeles to an extended family of Hollywood film composers, Newman began his songwriting career at the age of 17, penning hits for acts such as the Fleetwoods, Cilla Black, Gene Pitney, and the Alan Price Set. In 1968, he made his formal debut as a solo artist with the album Randy Newman, produced by Lenny Waronker and Van Dyke Parks. Four of Newman’s non-soundtrack albums have charted in the US top 40: Sail Away (1972), Good Old Boys (1974), Little Criminals (1977), and Harps and Angels (2008).

Newman has received twenty-two Academy Award nominations in the Best Original Score and Best Original Song categories and has won twice in the latter category, contributing to the Newmans being the most nominated Academy Award extended family, with a collective 92 nominations in various music categories. He has also won three Emmys, seven Grammy Awards and the Governor’s Award from the Recording Academy. In 2007, he was recognized by the Walt Disney Company as a Disney Legend. He was inducted into the Songwriters Hall of Fame in 2002 and to the Rock and Roll Hall of Fame in 2013. (more)