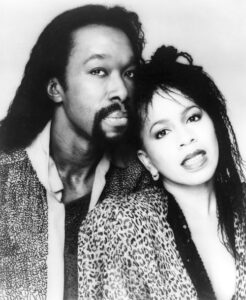 Ashford was born in Fairfield, South Carolina, and Simpson in the Bronx, New York City. Afterwards, his family relocated to Ypsilanti, Michigan, where he became a member of Christ Temple Baptist Church. While there, he sang with a group called the Hammond Singers (named after the founding minister, James Hammond). Later, Nickolas attended and graduated from Willow Run High School in Ypsilanti, Michigan, before pursuing his professional career, where he would ultimately meet his wife, Valerie. They met at Harlem’s White Rock Baptist Church in 1964. After having recorded unsuccessfully as a duo, they joined an aspiring solo artist and former member of the Ikettes, Joshie Jo Armstead, at the Scepter/Wand label, where their compositions were recorded by Ronnie Milsap (“Never Had It So Good”), Maxine Brown (“One Step at a Time”), as well as the Shirelles, the Guess Who, and Chuck Jackson. Another of the trio’s songs, “Let’s Go Get Stoned,” gave Ray Charles a number one U.S. R&B hit in 1966. That same year, Ashford & Simpson joined Motown, where their best-known songs included “Ain’t No Mountain High Enough,” “You’re All I Need to Get By,” “Ain’t Nothing Like the Real Thing,” and “Reach Out and Touch (Somebody’s Hand).” Ashford and Simpson wrote many other hit songs, including Chaka Khan’s “I’m Every Woman” (1978) and “Is It Still Good to Ya?”, originally recorded by the duo in 1978 and covered by Teddy Pendergrass in 1980.

As performers, Ashford & Simpson’s best-known duets are “Solid” (1984) and “Found a Cure” (1979). The duo were inducted into the Songwriters Hall of Fame in 2002. They are also recipients of The Rhythm & Blues Foundation’s Pioneer Award, ASCAP Founders Award, and the Grammy Trustee Award. Rolling Stone ranked them No. 19 on its list of the 20 Greatest Duos of All Time. (more)