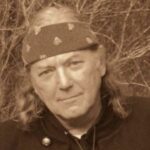 Alex Harvey was born in rural western Tennessee near Brownsville. In 1964, Harvey graduated from Murray State University in Kentucky with a master’s degree in Music and Education, and he also studied acting in Los Angeles.

Two of Alex Harvey’s greatest hits were “Reuben James,” recorded by Kenny Rogers, and “Delta Dawn,” recorded by Tanya Tucker, Helen Reddy and Bette Midler. In 1973, Alex Harvey’s “Delta Dawn” was nominated for a Grammy in the category of Best Country Song, however, the Grammy was awarded to Kenny O’Dell for writing Charlie Rich’s “Behind Closed Doors.” “To Make My Life Beautiful” charted in the Netherlands in 1972.

Derek Sherinian 1970 John Denver – Whose Garden Was This