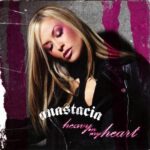 “Heavy on My Heart” is a song by American recording artist Anastacia from her third studio album, Anastacia. Written by Anastacia and Billy Mann, its arrangement is built on simple guitar riffs, and its lyrics chronicle Anastacia’s battle with breast cancer. The song was released as the album’s fourth and final single on March 7, 2005, and entered the top twenty in Hungary, Italy, the Netherlands, and Spain. A French version of the song, titled “Trop lourd dans mon coeur” (meaning “Too Heavy on My Heart”), appears as a B-side to the single.

Anastacia is the third studio album by American singer Anastacia. It was released on March 29, 2004, by Epic Records. Primarily a pop, power pop and rock album, Anastacia also includes elements of soul and R&B. It was a commercial success, peaking at the top of the albums charts in several countries, including Australia, Belgium, […]