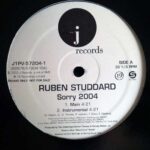 “Sorry 2004” is a song recorded by the American R&B singer Ruben Studdard. It was released as a single from his first album Soulful. This song spent 20 weeks on the Billboard Hot 100 and peaked at number nine on February 28, 2004. It also charted on the R&B/Hip-Hop Songs chart, staying 28 weeks and peaking at number two on March 13, 2004.

Soulful is the debut studio album from second-season American Idol winner Ruben Studdard, released on December 9, 2003 by J Records. The record received mixed reviews from critics divided over the quality of the track listing and Ruben’s vocal performance. Soulful debuted at number one on the Billboard 200 and spawned two singles: “Sorry 2004” […]