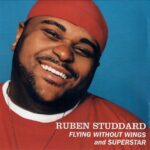 “Flying Without Wings” is a song by Irish boy band Westlife, released on 18 October 1999 as the third single from their self-titled debut studio album (1999). It is the band’s fourth-best-selling single on both paid-for and combined sales in the United Kingdom as of January 2019.

“Flying Without Wings” was covered by American Idol winner Ruben Studdard as his debut single in 2003. The single was released on 10 June and charted at number two on the Billboard Hot 100 on 28 June, behind “This Is the Night” by Clay Aiken. “Flying Without Wings” also appeared on the Hot R&B/Hip-Hop Singles & Tracks chart, peaking at number 13, and the Adult Contemporary chart, reaching number 27. The double A-side single with “Superstar” was released in Canada and New Zealand, peaking at number two in both countries, behind Aiken’s release.

Soulful is the debut studio album from second-season American Idol winner Ruben Studdard, released on December 9, 2003 by J Records. The record received mixed reviews from critics divided over the quality of the track listing and Ruben’s vocal performance. Soulful debuted at number one on the Billboard 200 and spawned two singles: “Sorry 2004” […]