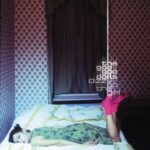 Dizzy Up The Girl is the sixth studio album by American rock band the Goo Goo Dolls, released on September 22, 1998 through Warner Bros. Records. The album is often noted for being the album which propelled the Goo Goo Dolls into success, although they already enjoyed some recognition with the downbeat track “Name” in 1995. Dizzy features more upbeat compositions than they had previously recorded. It is also the band’s first album to feature drummer Mike Malinin.

Dizzy Up the Girl is the Goo Goo Dolls’ most successful album to date, selling over 4 million copies (4× platinum certified). The success of Dizzy Up the Girl can largely be attributed to the rock ballad “Iris”, which was also included in the soundtrack album of the film City of Angels. “Iris” immediately reached #1 on the Hot 100 Airplay chart upon its release in March from the City of Angels soundtrack, and stayed on top for 18 weeks, setting a record that still stands as of June 2017. The song also reached #1 on the Billboard Modern Rock chart, the Adult Top 40 and Mainstream Top 40 chart, along with several other charts in the U.S and U.K, and included 3 Grammy nominations. The album sold very well, with “Iris” and “Slide” being the 2 most successful singles, while the other 3 singles achieved modest success.

In addition to the huge success of “Iris” (US #9), Dizzy Up the Girl featured three additional top forty singles, with the songs “Slide” (US #8), “Broadway” (US #24), and “Black Balloon” (US #16). The album also produced the moderately popular song “Dizzy” (US #108), which has since become a fan favorite. Along with top forty single status, music videos for all five singles reached VH1’s Top 20 Music Videos chart upon release.