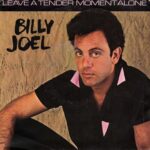 “Leave A Tender Moment Alone” is a song performed by Billy Joel and the fifth single from his album An Innocent Man. Toots Thielemans makes a guest appearance on harmonica.

The song reached number 27 on the U.S. Billboard Hot 100 charts and spent two weeks at number one on the Adult Contemporary chart. “Leave A Tender Moment Alone” was the only single from the album released there not to reach the top 20 of the chart, and, along with the title track, was the second single not to have a video made for it.

An Innocent Man is the ninth studio album by American singer-songwriter Billy Joel, released on August 8, 1983. The concept album is a tribute to the American popular music of Joel’s adolescent years with Joel paying homage to a number of different and popular American musical styles from the late 1950s and early 1960s, most […]